Last week, after what has been a 5+ year battle with infertility culminating in a donor egg IVF pregnancy, we had our first ever ultrasound not at a fertility center. Instead, we went to a regular old midwife practice…like normal people. I know some IVF’ers who have felt out-of-place when they make this transition, as if they still don’t belong. I kind of felt the opposite, to be honest — like after the number of ultrasound wands I’ve had shoved up my hoo-ha to get here, they should present me with some sort of elite membership card.

With that said, we went into the appointment with significant trepidation. I’d had a non-negligible amount of red spotting/bleeding two days before, which left me completely panic-stricken. Combined with the strong cramps that started the next day, things weren’t looking so good. “I don’t think I’m strong enough to go through a miscarriage too” I cried pitifully to my husband from my perch on the toilet.

You see, what’s been in the back of my head this whole time is the knowledge that the embryo we transferred was not the best quality. It was rated a 3BC before freeze, and had developed into only a 5CB upon defrost. The number is the stage of development, and the letters (A–D) rate the appearance/quality of the inner cell mass (which becomes the baby) and trophectoderm (which becomes the placenta), respectively. Since both things are required to make a baby, both grades are important. For a 5-day blastocyst transfer, the ideal grade is therefore 5AA. Since D-grades (=poor) aren’t even frozen, this meant our embryo barely made the cut.

While you have a chance with any embryo, studies show that the quality of the embryo correlates strongly with both the chance of implantation and the ultimate live birth rate. The best quality (5AA) embryos have a pregnancy rate >60% and a live birth rate >50%. With the embryo I transferred, on the other hand, I had only a ~30% chance of a positive pregnancy test, and only a ~15% chance of a live birth. In other words, although I had managed to beat the odds and become pregnant, my chance of miscarriage was a whopping 50%.

To make matters worse, those statistics were compiled for ‘ideal’ 5-day blastocysts, but our little dude/dudette didn’t make it to blastocyst until day 6. That means it was growing at a slower-than-normal rate, and that our true chance was likely even more pessimistic. Combining these statistics with my sudden bleeding and cramping, my husband and I went into our first pregnancy ultrasound unsure of what we would find.

After explaining our situation to the midwife and having her narrowly stop me from taking my pants off (…old habits…), I climbed onto the exam table for my abdominal ultrasound. I was in tears before the exam even started, so conditioned by our ‘journey’ to expect the worst. But almost immediately, she told us it was good news — she could see the growing embryo!

She then asked me to remove my pants for a trans-vaginal ultrasound (see!) and she told my husband he could get out his phone. (She had told him phones weren’t allowed earlier in case it was bad news…won’t fall for that twice.) The raspberry-sized embryo was measuring right on track for its age, and we could even see a heartbeat. Despite our worst fears, everything was progressing just fine.*

At this point, I should note that I’m still taking two different IVF medications: a form of estrogen (orally) and a form of progesterone (via vaginal suppositories). I assumed this was self-evident to the midwife, both because she knew it was a donor egg IVF pregnancy and because the progesterone leaks out in massive white chunks. I was therefore caught off-guard when she started delicately hinting that if I noticed any symptoms like discharge, itching, or redness, I should call my doctor. I smiled politely and tried to rack my brain (“Have I noticed any itching??”) when my husband piped up that I was on vaginal progesterone, to which she replied “Ahhhh, that’s what it is then.” From this, I learned two things: 1) They apparently don’t get many IVF patients, and 2) From the amount of white goo leaking out of me, she must have thought I had a vaginal infection to rival all vaginal infections. So that’s not embarrassing at all.

Success with a poor-quality embryo

Technically, our embryo wasn’t poor-quality, it was fair-quality. Still, this seemingly minor distinction didn’t ease my anxiety during the two-week-wait when confronted with the dozens of ‘Perfect 5AA!’ embryos that my fellow IVF’ers seemed to post about online. Perhaps there’s some bias where people only post about the grade if it’s good?

Since I had such a hard time finding success stories for anything less than BB, let me add our own small success story here for those still in the trenches. Our embryo was only a 3BC (and by day 6, at that), our donor (Marie) was a month shy of 37, and while we won’t stop worrying ’til the very end, here is the 8-week scan of our bean. 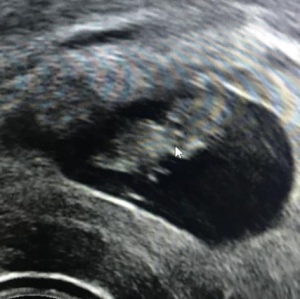 * When I called Ghent to share the good news, the midwife I spoke to thought I had used the eggs of ‘my partner’. So either known donations also aren’t that common, or Marie and I come off as an adorable lesbian couple.

View all posts by femmephysicist